This industry is forecasted to grow strongly in the coming period.

Growth prospects for the large, promising food and beverage sector

The fact that food and beverage consumption is positively correlated with the growth momentum of Vietnam's economy, coupled with the recovery of economic growth, demand for food products And drinks of our country's economy are also increasing. Generally in the period of 2014-2016, economic growth averaged 6.29% per year, significantly higher than the average growth rate of 5.52% Per year for the period 2012-2014.

Although the economic growth in 2016 did not reach the target of 6.7%, growth of 6.21% is still considered as a success as the Vietnamese economy faces the state of emergency. Droughts, floods and marine environmental incidents in the Central. Stable economic growth is the basis for explosive growth in the food and beverage industry as it accounts for about 15% of GDP and is on the rise. Nielsen Vietnam figures show a rebound of growth in the food segment (4.7%). In 2016, Vietnam's food and beverage market size is estimated at $ 30 billion. 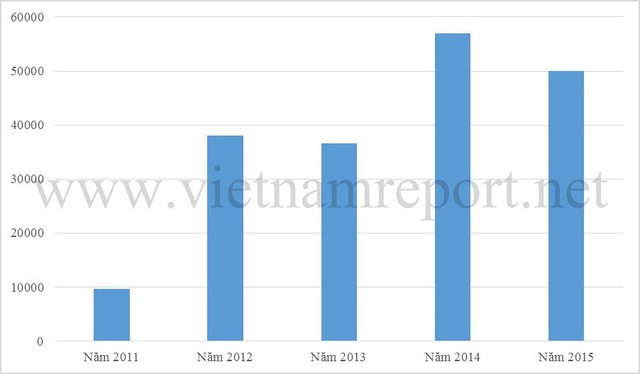 In addition to growing economic growth, the young population of more than 90 million people in Vietnam also increases the attractiveness of participating in the food and beverage market. Economic growth has raised the per capita income of people in 2016 to $ 2,200 / person / year, leading to higher household consumption of Vietnamese food and beverages. So besides large businesses, such as Vinamilk, TH true MILK, IDP, Masan, Dutch girl, Nutifood, Habeco, Sabeco, Tribeco, URC, Kinh Do, Bibica, Friendship, Tan Hiep Phat together with Foreign companies such as Coca-Cola, PepsiCo, Unilever, Nestle and San Miguel also appear to have more powerful groups in the industry such as Hoa Phat, Hoang Anh Gia Lai or Vingroup.

Economic growth has been steadily stabilizing, commodity prices have tended to rise slightly and the middle class expanded, tourists increased and international integration deepened, the food and beverage industry has a basis Firmly to continue to achieve double-digit growth in 2017 and maintain this growth until 2019. According to forecasts by BMI Research, the food and beverage industry Vietnam's beverages will maintain a compound annual growth rate for the period 2017-2019 of 10.9%. In addition, BMI forecasts that the dairy industry is expected to grow by 10%, that of alcoholic beverages is 11.1%, and that consumer demand will be concentrated on food and necessities. 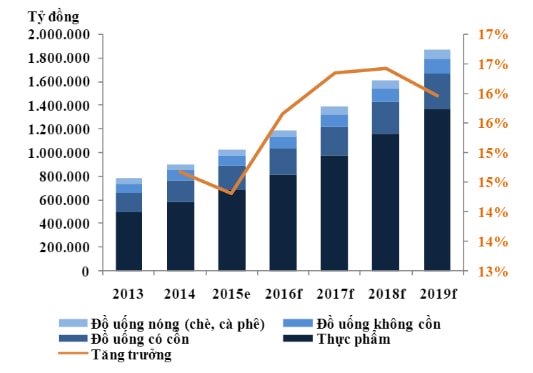 Industry growth in 2017 is expected to continue its strong growth momentum, reaching at least 15%. Along with the tendency to speed up the process of listing stocks on the stock exchanges of large enterprises in the industry (eg, Habeco) and the increasing penetration of many major brands in the world. Certainly the food and beverage industry will continue to thrive in the coming years.

Much potential, but also challenging

Large firms such as Vinamilk, Masan, Sabeco or Vinacafe are still relatively small. Small scale is a weak point in the current integration period as this is the reason for increasing production costs because it does not create increased productivity by scale. In addition, the level of governance, technology of food businesses, drinks in general are still inferior to the strong brands of foreign countries. Meanwhile, the psychology of "consumerism" of a segment of Vietnamese consumers in general has increased the presence of more and more international brands, this will be the trend to help foreign businesses Gradually dominate the domestic market if domestic firms do not promote branding. Specifically, in 2015, although Sabeco produced 1.38 billion liters of beer but by 2016, almost no growth.

However, Heineken has overtaken Habeco for the first time in the beer industry. Or, since 2015, the import tax rate on confectionery products has dropped to 0%, causing the local confectionery market to face mass influxes of imported products from many countries in the region. ASEAN: Malaysia, Indonesia, Thailand. Imported products are diverse in terms of design, type and quality that have increased the level of competition in the market. For local confectionery enterprises, this is a real challenge in keeping. Market share for your business.

Prior to the process of deep integration, the economy maintained steady growth, modern consumerist style and abundant supply of domestic inputs, opportunities for food and beverage businesses. Increasing high. However, in order to maintain and expand its position in the market, enterprises must focus on weaknesses in the current time, overcome and master changes in the market in the coming time.

According to Tung Le
Vietnamnet

Incrementement mounted with an guarantee quality of credit

Admire the animation of the production line full of fun